Nigerian rapper, Falz the Bahd Guy has reacted to Simi and Adekunle Gold’s wedding Engagement and wedding ceremony, which is scheduled to hold today. 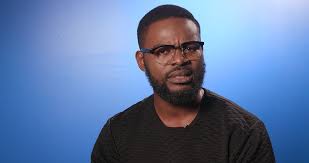 Gold and Simi had their ‘secret wedding introduction’ in Magodo, Lagos 3 weeks ago and they are set to become legally married today, 10th of January.

Even though there have been rumours of a romantic relationship between Falz and Simi, the rumours remain unconfirmed as neither of them have reacted to the rumours.

Following the trending news of Simi’s marriage, the ‘sweet boy’ crooner has taken to Twitter to show some ’emotions’.

In his usual humorous manner, Falz uploaded a gif of a boy shedding tears.
Several reactions from Nigerians have followed the tweet since then.

You have reacted on "Falz Heartbroken as he reacts to news of Simi a..." A few seconds ago

Sporting vs Arsenal – What Emery told his Boys at half-time

Blackface drops His own version of African Queen

2019: Obasanjo once again, declares Atiku fit for Presidency. Says he...

Pastor Alph Lukau Confesses to Lying to the World Over Resurrecting...

Malt Drink and its Goodness. The Nigerian perspective.

ABOUT US
Gistmaniac publishes a large category of News in Nigeria. We parade ourselves in Verified News. Gistmaniac is one of the leading news and media websites in Nigeria that provide day-by-day News update to the Nigerian masses and Africa in General.
Contact us: gistmaniacofficial@gmail.com
FOLLOW US
© 2019 | All Rights Reserved
Tel: +2348034863765
Email: gistmaniacofficial@gmail.com
MORE STORIES